It goes without saying that Big Red Block Party has become a fall favorite and this year proved to be no different. Big Red Block Party featured its own Snapchat filter for guests to take a fun photo for social media, as well as a fun new GIF photo booth. Event goers had a fun time playing with props and creating their very own GIFs to share with family, friends and other Husker fans!

“This year’s Big Red Block Party was so much fun! The tailgate theme was cool, since it added lots of energetic yard game competitions to keep everyone entertained. A lot of us thought the silent auction items were the best we’d seen and we all had a great time bidding on multiple entries,” Active Member Katie Johnson said.

Even though it’s a day full of cheering on your favorite team and spending time with friends, it is also a fun way to raise money for a great organization at the same time. Community donations also contribute to the success of this event each year. The Big Red Block Party had 15 event sponsors who supported through venue, food, drink, décor auction and raffle donations. The event in total had 90 silent auction packages and three raffle prizes. The event’s estimated total revenue will be around $20,680.

Despite the Husker loss to Minnesota, those in attendance were still pleased with an afternoon filled with delicious food, friends, football and fundraising! GBR! 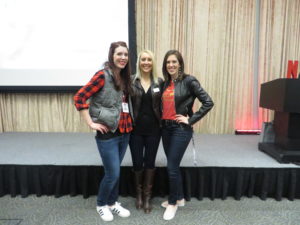 A huge “thank you” goes to event co-chairs Catherine Enenbach and Ashley Rich! The duo’s creative vision and leadership helped to create a fun and successful event. The hard work of the entire committee was evident throughout the event. Here, Catherine (far left) and Ashley (far right) pose with President Megan Riebe Reay.

TO SEE PHOTOS FROM THE EVENT, VISIT OUR FACEBOOK PHOTO GALLERY, HERE!

FROM A MESS TO MARVELOUS, CHECK OUR TIME LAPSE AUCTION SET-UP VIDEO.

The Junior League of Omaha is an organization of women committed to promoting voluntarism, developing the potential of women and improving the community through the effective action and leadership of trained volunteers. Its purpose is exclusively educational and charitable.

By continuing to use the site, you agree to the use of cookies. more information